My Journey with Samatha

Just about a month ago we were celebrating Samatha’s accomplishments. Now we celebrate her life.

I met Samatha about two and a half years ago. She came to our co 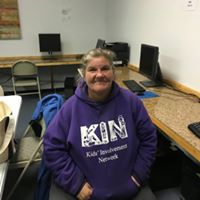 mputer skills class at Bridge the Gap Mission’s Education program. Samatha was tough and not very friendly with the other people at ASPIRE, the counseling center we partnered with. She finished the computer class and received her refurbished computer to take home to continue her skills at home. I liked her. She talked about getting her GED. I suggested she join my class on preparation for taking the high school equivalency test. When I asked her why she had quit high school she said she was always getting into trouble. She was smart and over time she changed. Our group of students became very close and supportive of each other. Since she was very good with computers I would ask her to help another student get into the program to practice, sign up for the test or check their scores. She did well on her first test. Samatha started encouraging others. When I couldn’t be at a class I asked her to supervise their practice on the computers. She told me she had set a goal of finishing her final test before her birthday and she did.

Everyone celebrated her success and she was so proud. She told me she didn’t want to panhandle anymore and wanted to get her CDL License and drive a big truck. Larry, the head of ASPIRE, told her if she got her GED he would help pay for truck driving school. He found a truck driving school that would accept someone with a felony on their record. There was only one problem. She had to have a driver’s license. She had never had one. I told her to go online and research what she needed. Bridge the Gap Mission through their community outreach paid for the liability insurance she had to have to take the test. I told if she studied online for the written part and passed that then I would go with her and she could use my car for the driver’s test. She took the written part and passed, we practiced in my car and went to take the driver’s part. She failed. I saw a little of the old Samatha coming out but we talked. One of the biggest things I teach in the class is that it doesn’t matter how many times you fail, just do it again. You will get there.

We went back in two weeks and she passed. She was so excited. She was applying for a job at Enterprize at the airport and working on filling out all the forms for truck driving school. She was encouraging everyone’ “If I can do it, you can.”

I had just dropped off one of the students to take her writing test when I got a call from another student in the class that Samatha had been found in the bathtub dead. They believe she had a seizure. At our next class the group was devasted. I told them that we have to continue and achieve our goal. That will be Samatha’s legacy.